Blocked drain has caused sewage to build up outside our house. 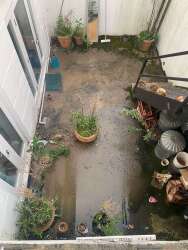 A blockage outside has caused sewage to back up and pool outside our house on the basement level. It's already been like this for 2 weeks.