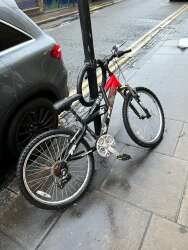 Abandoned Bike Locked to Post - Has been here for more than a year and obstructs path. Doesn't appear to be roadworthy.