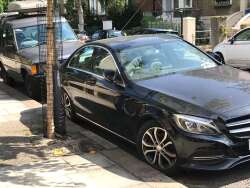 This Mercedes has been parked in Tottenham Road for a couple of months and has been given several parking tickets. It appears to be abandoned.