A Highways Obstructions problem has been found

Reported via desktop in the Highways Obstructions category anonymously at 14:06, Thu 5 August 2021 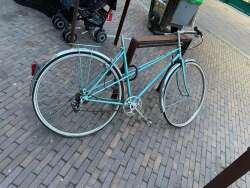 I would like to report an abandoned bicycle. It’s a mint/green Peugeot bicycle located just between Holland&Barret and Shoe Zone shop on 387a Mare street, E8 1HY.Some components have already been removed.

Looking forward to hearing from you.