Reported via mobile in the Bin Contamination category anonymously at 14:51, Wednesday 14 April 2021 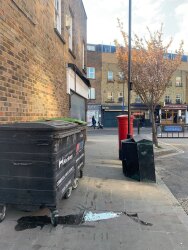 Two large wheelie commercial waste bins narrowing the width of the pavement and cussing obstruction when walking past with a pushchair. I believe they belong to Off Broadway bar and used to be located behind their double gates, but are now on the pavement