Reported via desktop in the Illegal Parking category anonymously at 21:56, Fri 19 February 2021 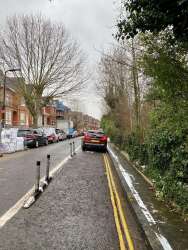 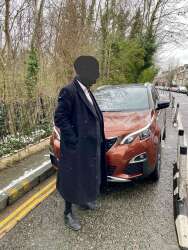 This is a recurring issue on this road. Drivers park their cars on this cycle lane day in, day out. I ride through this road every day as part of my commute to work.

On Tuesday the 9th of February at 2:30pm, I was riding back from work when I came across this illegally parked car. Just as I was taking a picture of the car to report it, the driver and another adult got out of the car and started recording me with their mobile phone.

As I slowly went past them, one of them started saying some rather dismissive things in quite an angry tone. I decided to stop to clarify my motives for taking the picture. A few minutes later, as the discussion was still ongoing, a passerby decided to join in and take their side. This complete stranger's argument went from being disdainful to patronizing to finally apologetic.

At this point, I decided to take my phone out and started recording the situation. Very quickly one of them stepped in front of the car with the intention of covering the registration plate, as you can (not) see in the second picture.

Rule 140 of the Highway Code states that: "You MUST NOT drive or park in a cycle lane marked by a solid white line during its times of operation".

This section of Cycle Superhighway 1 has got a solid white lane on the roadside and a double yellow line on the curbside, plus bollards and cycling signs painted on the path.

I felt intimidated by these three grown men, which I think was nothing short of appalling. This issue needs to be sorted. Perhaps the bollards could be re-arranged in a way that physically stops cars from fitting in between them? At the moment the bollards are flexible and cars can drive over them freely.

This report is now closed to updates. You can make a new report in the same location.