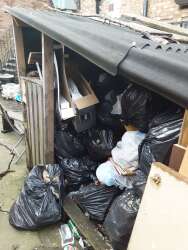 LOCATION IS RUBBISH FROM Top floor, 6 and 8 Manor Road, N16 5SA LEFT BEHIND THE SNOOKER CLUB UP THE STARIS TO YOUR RIGHT ON GOING KEPT RUBBISH WITHOUT A BIN A CALLS PRIVATE VAN FEW TIMES A YEAR TO TAKE THE RUBBISH BUT THIS CAUSES RATS AND PEST IN THE NEARBY LOCATIONS WHICH IS A BAKERY