Blocked drain - flooding next and into garages 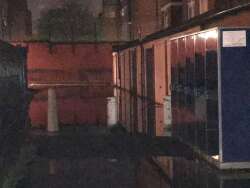 There is a blocked drain on Leatherhead Close which means that even light rainfall causes a lake to form on the road which gets into the garages. The image was taken on the evening of 15 December. Access to the garages was impossible as the water was so high. Also broken guttering between garages 2 and 3. Issue has been present for a long time - reported in June but not actioned.