Reported via desktop in the Highways Obstructions category anonymously at 13:30, Wed 28 October 2020 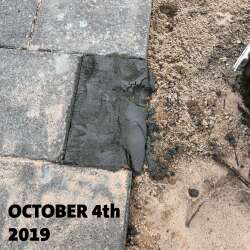 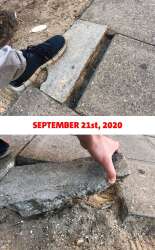 In early October of 2019, this paving slab was 'replaced' poorly by workmen just by filling it in with cement directly on top of the sand (!) Just a few days later, and no surprise, it was already starting to crack and crumble. Not even one year later, it was completely loose and dangerous. Why was this not properly fixed in the first place by contactors, using a paving slab? Who signed off on this nonsense? Why were they paid for this? Will they fix it properly at no charge to the council, with an actual paving slab this time? Why are contractors allowed to get away with such shockingly poor works and charge the council for it? This is a recurring theme around the borough with very shoddy workmanship.