Collapsed brick wall at boundary between 63 & 65

Reported via desktop in the Highways Obstructions category anonymously at 12:10, Tuesday 13 October 2020 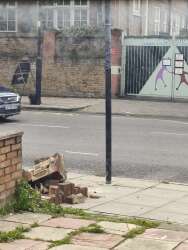 Brick wall of number 65 Blackstock Road has collapsed possibly due to being hit by a vehicle and is sprawled over the adjoining footway opposite Ambler Primary School.