Reported via iOS in the Flytipping category anonymously at 18:11, Tuesday 16 June 2020 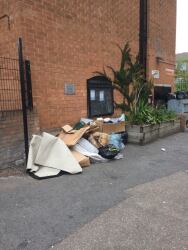 One of the usual flytipping spots. I suspect some residents believe it is some sort of official pick up spot for rubbish as it is used so often