Abandoned bikes. Locked to railings next to 88 Adley Street E5

Reported in the Abandoned vehicles category anonymously at 13:06, Fri 31 August 2018 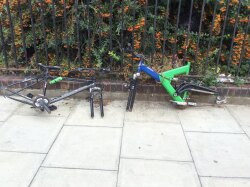 One bike abandoned for over a year, other for 4 months. Both locked to railing. Wheels been taken and frames left. Rusting and obstructing pavement and attracting fly tipping